From the perspective of enterprise scale, the capacity utilization ratio of enterprises of different scales has declined to different degrees. The capacity utilization ratio of large and medium-sized enterprises with capacity between 50000 and 100000 tons has the smallest decline on a month on month basis, with a decline of only 0.16%; while the decline of super large enterprises with capacity greater than 100000 tons is also controlled within 1%, which is mainly affected by the off-season of the industry, the slowdown of real estate investment growth, etc., and the output is all lower However, in 2017, another special situation was that some orders from small factories with environmental protection qualification not up to standard were sent to large enterprises, supporting the start-up of large enterprises. Figure 4: production of aluminum processing materials in 29 provinces and cities in 2017 (unit: 10000 tons) China's new aluminum imports are still at a high level, and the domestic aluminum industry gradually breaks through the technical encirclement

In recent years, with the rapid development of China's large-scale infrastructure investment and industrialization process, China's aluminum profile industry has developed rapidly, with the continuous improvement of production scale and product quality, and the output and consumption of the whole industry are growing rapidly. As a result, the number of imported aluminum began to decrease, but still maintained at a high level. Especially in the aspect of high-end aluminum alloy, it is basically monopolized by Alcoa, Alcan, Cruz aluminum and Japanese light metal companies. From the perspective of China's aluminum profile import regions in 2017 and the first two months of 2018, Japan, the United States, Russia and Germany are the largest aluminum profile importers in China. 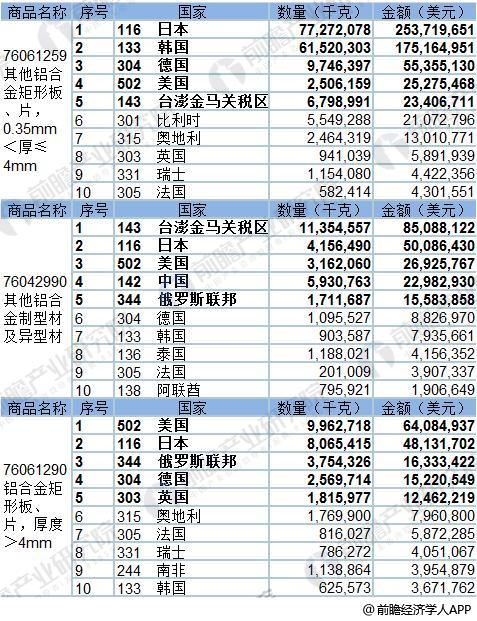 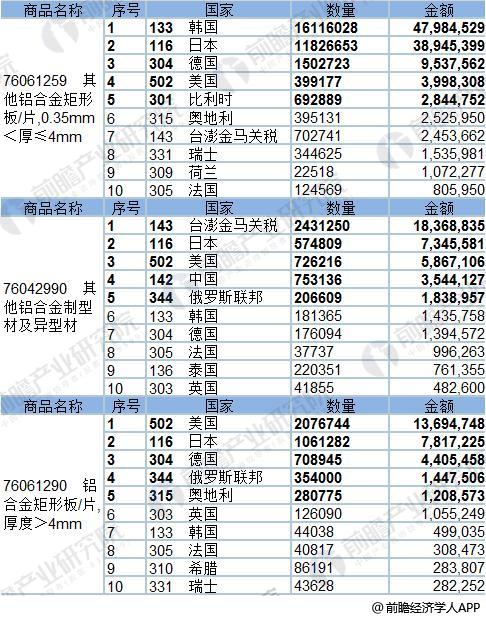 Taking aviation aluminum as an example, aluminum technology in China is relatively weak. At present, the aluminum lithium alloy mainly used in C919 aircraft accounts for about 65% of the total aircraft materials, while the domestic materials account for a relatively low proportion and mainly rely on imports. In general, China has about 24 kinds of metal materials that need to be imported, 17 of which are provided by Japanese enterprises, accounting for 70.8%.

However, in recent years, China's leading aluminum group has gradually broken through the technical siege. In December 2016, after nearly 10 years of research and development and special research, Chinalco Southwest Aluminum finally became the first enterprise in China to fully master the production technology of high strength and high toughness 7050 aluminum alloy pre stretched thick plate. The successful R & D and application of this technology has completely broken the blockade of manufacturing technology in key areas of China by western countries for a long time, and made China's relevant manufacturing technology water enter the international advanced ranks.

Zhongwang group is also actively exploring the field of aluminum for aerospace. Aiming at the specifications, characteristics and strict quality requirements of aluminum profiles, it launched the research and development project of "7075 aviation extrusion bar".

Industry insiders believe that the 13th five year plan for new materials industry proposes to organize application demonstration with new materials with huge market potential and complete industrialization conditions, such as aviation aluminum, carbon fiber composite and high-temperature alloy. There will be an obvious gap in the supply of domestic high-end aluminum, the aluminum industry will usher in a major development opportunity, and the market scale of aviation aluminum is expected to grow rapidly.